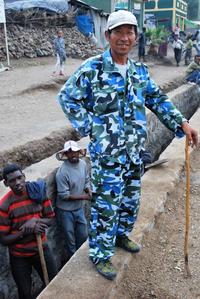 China’s new globalism plays out as much in the lives of ordinary workers who shoulder the task of implementing infrastructure projects in the world as in the upper echelons of power. Through unprecedented ethnographic research among Chinese road builders in Ethiopia, Miriam Driessen finds that the hope of sharing China’s success with developing countries soon turns into bitterness, as Chinese workers perceive a lack of support and appreciation from Ethiopian laborers and state entities. The bitterness is compounded by their position at the margins of Chinese society, suspended as they are between China and Africa and between a poor rural background and a precarious urban future. Workers’ aspirations and predicaments reflect back on a Chinese society in flux as well as China’s shifting place in the world.

Tales of Hope, Tastes of Bitterness: Chinese Road Builders in Ethiopia sheds light on situations of contact in which disparate cultures meet and wrestle with each other in highly asymmetric relations of power. Revealing the intricate and intimate dimensions of these encounters, Driessen conceptualizes how structures of domination and subordination are reshaped on the ground. The book skillfully interrogates micro-level experiences and teases out how China’s involvement in Africa is both similar to and different from historical forms of imperialism.

Miriam Driessen is an anthropologist and a writer of literary nonfiction.